Creationists like to take advantage of the origin of life question for several reasons. The greatest is that few scientists even are familiar with the current research, and so will often fail to be able to discuss it.

However, based on previews of "Expelled" the question was further obscured by dishonest reporting. In the case of Dawkins, as I recall, he was asked if there were any scenario he could imagine that would allow for an "intelligent designer?" The space alien response was in fact one frequently given by Intelligent Design creationist superstars such as William Dembski, and Mike Behe. Intelligent Design creationists in their effort to hide their actual religious origins theology have asserted that spacemen or time travelers could be the creators of life on earth. When these ideas have been discussed by actual scientists, they have been discarded as silly, unworkable, or meaningless. But they have been reincarnated by the creationsits
who then have exploited the absurdity for this movie.

The derision given to the idea that crystals contributed to the origin of life is an excellent example of how scientific ignorance is exploited by the film.

Consider for a moment, your bones are made from calcite- a crystal of calcium carbonate. Those bones and your teeth also need another crystal, apatite, or hydroxylcalcium phosphate. Marine shells are made from calcite and aragonite- both crystals. Plants, particularly grasses need silicon crystals called phytoliths to exist. The bodies
of diatoms are mostly crystal silicon. Silicon or calcium crystals are found in nearly all life on earth. Another crystal of iron oxide, magnatite, is found in nearly all life on earth, even bacterial.

Is it then silly, or irrational to think that these essential crystals were part of the origin of life? Not at all. You will die without them.

You got taken in by Stein.

No there isn’t. There are less dishonest efforts, but there are no successful arguments for Intelligent Design Creationism that can pass as science. We tried to find one years ago. I, and a group of twelve other scientists approached the IDC leading authors, Johnson, Behe, and Dembski on their own terms; could IDC be scientific, and as science could it survive on its own without supernatural magic as a prop? The resulting book, “Why Intelligent Design Fails (2004, Rutgers University Press), was also cited as part of the Dover “Pandas Trial” which found that IDC was merely a religious dogma masquerading as science.

Anyone writing about film must know that editing trumps raw footage, or the intent of the people interviewed. So what is one to do? Dawkins is widely know to refuse interviews with creationists because he knows from long experience that there is no possible protection from the editing bias. In ideologically driven documentaries such as “Expelled” you might find that your “answer” was to a question the interviewer never even asked. The “Expelled” producers avoided Dawkins’s (and other’s) resistance by lying about the nature of the film they were making.

The NCSE webpages dedicated to Exposing Expelled detail this and other lies and misrepresentations made by Stein and his cohorts.

The NCSE has "opened" their webpages exposing the frauds in the movie "Expelled." The new material, is excellent, and I strongly recommend it.
Posted by Gary S. Hurd at 10:09 AM No comments:

This caught my eye a while ago: 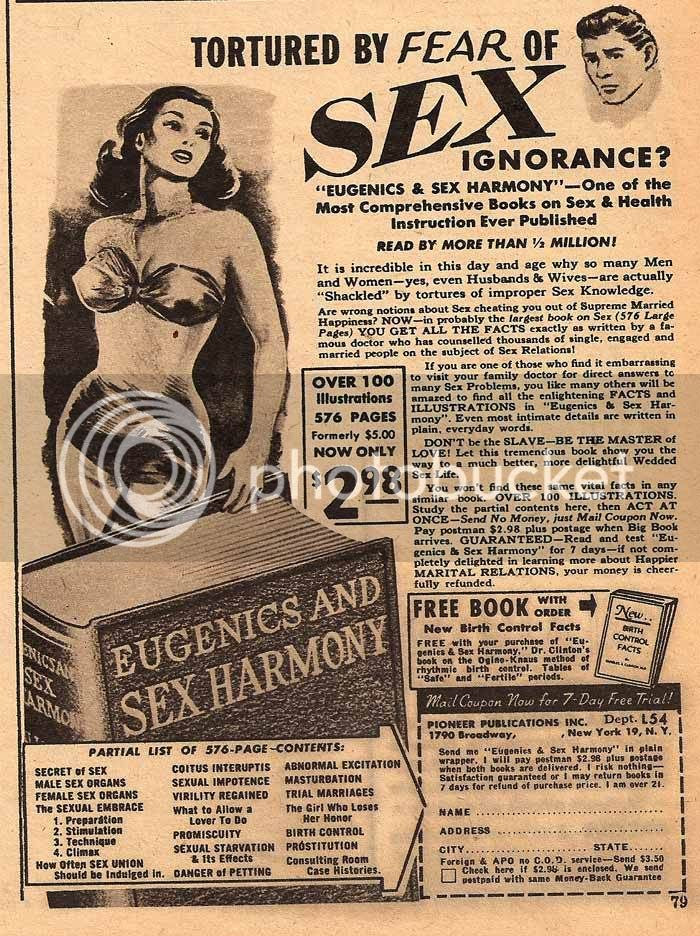 It is a scan from a 1950s "men's magazine." I had been searching for items related to the American eugenics movement, and this beauty popped up. I found a 1933 copy on Amazon that was actually offered at the same $2.99 as the 1953 advertised price. I’ll be using the advertisement and the book by Herman H. Rubin, M.D., as a case study in popular eugenics thinking in the USA prior to the Second World War, and just after it.

The language used in the advertisement is interesting all by itself. The banner has “tortured” “fear” and “sex” all linked to each other. Notice that the sadomasochistic imagery continues; “Shackled by tortures of improper Sex Knowledge,” “DON’T be the SLAVE - BE THE MASTER of LOVE.”

These men’s magazines were also rife with other sadomasochistic images involving Nazis, as in the cover art from a 1966 magazine seen below;

Creationists habitually employ the same themes as in the advertisement, and the cover art in regard to the theory of evolution. They claim that teaching evolutionary biology turns children in to depraved sex maniacs, and that evolutionary theory lead directly to the Holocaust.

Is it their sexual repression and fear, or merely a convenient and cynical ploy?
Posted by Gary S. Hurd at 10:30 AM 1 comment:

Sorry not to have posted in months.

The NCSE has a webpage ready to expose the new creationist movie "Expelled." Check it out.
Posted by Gary S. Hurd at 7:34 AM 1 comment: