“The Grand Canyon Monument to an Ancient Earth” 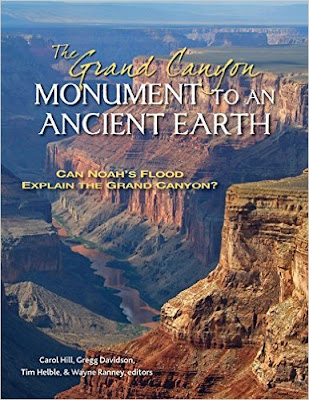 I have been waiting for my copy of “The Grand Canyon Monument to an Ancient Earth” since I heard about it nearly a year ago. It arrived May 5th, and it was worth the wait. The first thing readers will notice is that this is a beautifully illustrated book. The efforts of Tim Helble and graphic designers Bronze Black and Susan Coman are proven on nearly every page. The second thing you will notice is that this book is an excellent short introduction to geology. This is true even ignoring the special focus on countering widely believed falsehoods about the Grand Canyon.

The principle authors are professional geologists, and most are evangelical Christians. Over the years they became increasingly concerned at the distortions, and outright lies that are spread by young earth, “Flood Geology.” This book’s title is in fact a counter to a popular creationist tract, “Grand Canyon Monument to Catastrophe” which promotes the absurd idea that Noah’s Flood deposited all the sediments, and carved the Grand Canyon in a single year just 4000 years ago. I have already written on this here in Andrew Snelling, and Steve Austin: Creationist Frauds. The authors show that this is not merely physically impossible, but that such an idea is unsupported by the Bible. I was particularly pleased that these scientists reinforced my observations about Young Earth Creationism frauds regarding the Grand Canyon, and geology in general. Particularly pleasing was their dismissal of the Mt. Saint Helens and Noah, fraud and that they have reached the same conclusions as I did Dismissing "catastrophic plate tectonics"

There are an estimated 40 percent of Americans today who are being fooled by outfits like Answers in Genesis, or the Institute for Creation Research. These people are the intended audience for this book. As the last sentence in “The Grand Canyon Monument to an Ancient Earth” says, “Truth always matters.”
Posted by Gary S. Hurd at 11:22 AM No comments: