I was indulging in some creationist debating the other day. As usual, there was a bull creationist (also climate denier, and all-round right-wing loon). He triumphantly presented the following model of "the scientific method" demanding that it be applied to evolution. 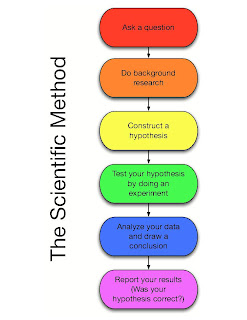 This is a lot over simplified as a "model" of the scientific method, but it is found all over the internets. It is about appropriate for third grade. I'll expand it as it seems needed. But just for fun, let's see how Darwin did this.

In Darwin's case, the question had already been asked 50 years earlier. The question was known as "the species problem." In the short form, the 1700s naturalists (pre-scientific biologists) realized that species were not fixed, they varied a lot, and there were many life forms that had existed than no longer existed. So the question was already asked, "How do we properly define a species to reflect the fact that they are changing, and can become extinct."

I don't like the use of the word "research" at this step. A better phrase would be, "Do a Literature Search." There are hundreds of scientific journals published every day, and thousands of books published every year. Today you must ask if your question is a real one that has not already been long answered. Also, because there are actual careers in the sciences it has become a long process of professional education and training before anyone gets to propose and carry out a personal research project. I was lucky to have trained when a university undergraduate could still do independent work.

Darwin's education was quite remarkable as a preparation for his eventual career as a scientist. I sketched it out at "Notes on Charles Darwin’s Education."

The best part of Darwin's training was in Geology. However, his first scientific report was from research he did supervised by Dr. Robert Edmund Grant, who shortly after became Professor of comparative anatomy and zoology at London University (1827-1874). Grant referred in print to two of Darwin’s original discoveries made in 1826; that the so-called "ova of Flustra" were in fact larvæ of a parasitic worm in rock mussels (Mytilus), and that the little globular bodies which had been supposed to be the young state of Fucus loreus were the egg-cases of the worm-like Pontobdella muricata. Darwin had read papers on these observations to the student’s “Plinian Society” founded by Professor Robert Jameson.

An excellent biography was recently published, "Darwin's Sacred Cause" by Adrian Desmond, and James Moore (2009, University of Chicago Press).

The obvious problem with this step is that hardly anyone knows what a "hypothesis" really is. I recently wrote up a short tutorial, "Scientific Fact, Theory, and Law." I learned from an undergraduate class in the philosophy of science. Our major reading was Karl Popper's "Logic of Scientific Discovery" published in English in 1959, and Carl Hempel's 1965 book, "Aspects of Scientific Explanation." I still have my copies.

But, Darwin's most famous notebook sketch is reproduced below. He drew it while aboard the HMS Beagle on a 5 year scientific, and navigation mission between December 1831 and October 1836. Here is Darwin's hypothesis for the solution of the "Species Problem." 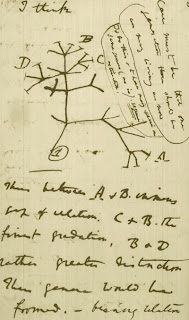 "Test your hypothesis by conducting an experiment"

This is the most easily misunderstood step in the formula above. First, a properly constructed hypothesis must be a logical consequence of your theory. This must be a statement which is observable in principle, and it must be different from any hypothesis derived from alternate theories. For example, Theory #1 "Thunder is caused by Thor." Theory #2, "Thunder is sound generated by the supersonic expanding gasses ionized by the electrical and heat energy of lightening." If we merely watch lightening and listen to thunder, there is no data that select one theory over another. One of the first internationally celebrated American scientists was Benjamin Franklin. In 1750 he published a proposed experiment to test if lightening was electric. His discovery earned him an outstanding scientific reputation. He was elected a fellow of the Royal Society of Science in 1756. Since we know now that lightening was electricity and that sound was energy transmitted by air, the idea that lightening caused thunder is favored. The latter theory was not definitively established until 2003 by spectrographic studies of lightening. So, it is important to remember that a "hypothesis" and its testing can be built on the results of centuries of experiments, and observation.

The second difficulty of understanding the scientific method is the popular misconception of what is an "experiment." The easiest example to describe is from chemistry- mix two chemicals together and determine if they made a new product. You can repeat this thousands of times, and mostly you will get the same result each time. We do similar experiments in biology- increase or decrease the expression of a gene and see how this changes the function of a cell, organ, or animal. But, there is another form of "experiment" which is the repeated observation of a natural phenomena. This is the experimental method of astronomers who don't need to create stars in laboratories. They repeatedly look at the light, or other radiation from stars or planets and note any variation in position, or spectra. Geologists can study tectonic plates without needing to create a planet in their laboratories. They make repeated observations of the chemistry, mineralogy, and structure of rocks from specified locations and compare any variations to other study locations.

Many biological studies were also published (1838 to 1843) by other scholars with Darwin having provided the collected material, and their geological contexts. What will surprise most people is that once back home in England, Darwin undertook an 8 year intensive study of barnacles. From 1846 to final publication in 1854, Darwin wrote a total of 4 books, two on the modern species, and two on the fossil. While this work was seen as a distraction by Darwin's friend Thomas Huxley, Darwin was obviously testing his ideas about evolution by the systematic study of a globally distributed, and easily collected group of species. It should also be known that these studies are still highly regarded by professional specialists today.

So, from 1832 to 1854 Darwin was actively "conducting an experiment" in the proper sense of making systematic observations of nature.


"Analyze your data and draw a conclusion"

"Report your results (Was your hypothesis correct?)"

It is getting time to wrap this up. There are several plain mistakes in the "scientific method" model above and this is from either the practical approach favored by Thomas Kuhn's "Structure of Scientific Revolutions," or the abstract philosophical approaches of Popper, or Hempel. And it is contradicted by my 40 years of scientific work, and publication.

First, in a properly conducted research project, the result of your analysis is your conclusion. There should not be any large step between the results and your conclusion. For example, my most recent publication was last month. In it, I and my collaborator Prof. George E. Miller analyzed the elemental composition of clays, and pottery from archaeological sites, and river drainages in S. California using neutron activation analysis. These geochemical data were then subjected to statistical study used to match the ancient pottery to clays and minerals which identified the source materials used by pre-historic potters. The results were our conclusions. There was categorical evidence that the pottery had been manufactured at, or near the locations where it had been found. There was no evidence that this pottery had been traded in from distant locations. We had designed the project so that whatever the results were, we could state them as an either/or contrast.

Darwin's problem was much more complex. He in fact did need to organize his thoughts to present first the pattern of the biological data, and then how his theory of natural selection on inherited traits, produced new species following common descent, and extinctions. We know that he worked on the resulting publication between 1854 and 1858. What caused him to stop worrying at minor details was the letter he received from a fellow biologist, the young Alfred Russel Wallace on 18 June 1858. In that letter, Wallace sent a manuscript of a paper about evolution. Darwin saw that it was essentially the same ideas he had been working on for decades. As a result, the paper by Wallace, and one by Darwin were read at the London meeting of the Linnaean Society the following month. Darwin's "On the Origin of Species," was completed and published on 24 November 1859.
Posted by Gary S. Hurd at 12:35 PM 3 comments: