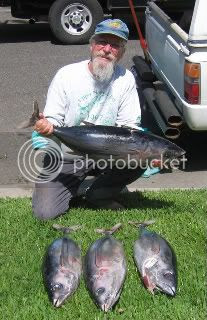 I went out of Seaforth Landing in San Diego, California aboard the Eclipse. We had a great day of fishing.
Posted by Gary S. Hurd at 8:24 PM No comments:

The American Association for the Advancement of Science, and the Pew Research Center for the People and the Press have released a report on the American public’s science knowledge and opinions regarding science and scientists. (Links are to the AAAS news release, and the Pew report).

While there is much of interest and for concern, the most interesting topics for the evol/creato activist are the questions related to human evolution.

The “teach the controversy” position pushed by the creationists needs for a controversy to actually exist, at least in the minds of the general public. This is a Big Lie approach straight from the playbook written by the tobacco industry. With only a handful of industry “scientists” funded through the Tobacco Institute, the industry created a story that “the science linking tobacco and cancer is disputed” and “there is legitimate controversy about the effects of tobacco smoking among scientists.” And there is evidence that this lie is working for creationists.

The AAAS/Pew survey found that among scientists, there is a 97% agreement that humans, and all living things have evolved via natural selection. Yet, 28% of the public believes that scientists are not in general agreement that evolution occurred. And, 43% of creationists (mostly White Evangelicals, and about 31% of the general public) claim there is no scientific consensus on evolution.
Posted by Gary S. Hurd at 11:55 AM No comments:

Why Re-Invent the Crystal?

My short piece on the movie Expelled and cyrstals, written for the National Center for Science Education" has been posted to their website.
Posted by Gary S. Hurd at 5:02 PM No comments:

“The End of Darwinism”

“The End of Darwinism” would have disappeared as another self published creationist screed had not Pat Buchanan puffed it on WingNutDaily. There have been a half dozen science bloggers who have taken Buchanan’s piece apart, but I waited until I could read Mr. Windchy’s book myself.

Windchy states that he had worked on this book since 1993. I found this very strange as he makes basic errors of fact that could be corrected with a few minutes of internet search. The errors begin immediately and they range from minor factual mistakes to gross mistakes in fact and scholarship.

One example of a minor error of fact is on page 14 when Windchy claimed that, “The German Darwin (Ernst Haeckel, gh) was convicted of fraud by a faculty court at the University of Jena, his employer in Prussia …” This is not true. In fact, there was never a “faculty court” in the first place. This particular creationist lie has been repeated in their echo chamber so often that it occasionally has appeared in the popular press. This has been pointed out by

Haeckel was accused of publishing drawings of embryos that were fraudulently presented, or altered to make his theoretical argument appear better supported. In only one instance did Haeckel need to issue a retraction. This was in his illustration of the “sandal stage” of “dog, chicken, and turtle” embryos in his first edition (1868) of “Natürlich Schöpfungsgeschlichte.” These were actually the same woodcut, apparently of the chicken embryo at this stage of development, that had been repeated. (To see the illustration in question, look at Fig. 7.12 of “The Tragic Sense of Life” by Robert J. Richards, 2008). This particularly outraged Ludwig Rütimeyer, and Wilhelm His.

Haeckel corrected this in the second and later editions. The point he had been making was that embryologists could not tell one species from another at that early stage of development, which was certainly true at the time, and had been earlier remarked on by other scientists such as von Baer well before Darwin ever wrote about evolution. In another instance it was the accuser, Arnold Brass, who had to retract his false claims of fraud in 1908-1909.

Haeckel’s pet theory of “recapitulation” or “biogenesis” was totally wrong and forms no part of evolutionary theory. He proposed that as organisms underwent embryonic development, the stages of the embryos replicated each of the adult forms of their evolutionary predecessors. However, his observations that embryonic development is more similar the more closely the species are related, and that the earlier development of vertebrate embryos are all very similar, were substantially correct. With our new ability to track the fate of individual cells in embryos, these observations are even stronger today than they were in 1870. Windchy has obviously not bothered to become informed about Haeckel, or his contributions to science, or what modern embryology is about. After supposedly spending 16 years, one would expect better. Instead, he regurgitates creationist lies and slanders- using century old controversies to try and obscure that science of evolution is the most successful explanation of life available.

I have been appointed to the National Assessment of Educational Progress (NAEP) science panel. What this is will be better explained by either their official website, or the Wikipedia page.
Posted by Gary S. Hurd at 1:17 PM 2 comments:

I have not totally disappeared

A creationist recently asked, (lame-ass - punctuation - as in the ORIGINAL !!11!!)

Just one more - how well qualified was darwin to propose a theory - hundreds of years ago- that is still believed but not proven - he was a theologian - but was he a scientist or an amatuer taxonomist ? The average biology student knows more than Darwin who thought a cell was a blob. How come darwin did not need qualifications ?

I’ll first eliminate the argument that Darwin was some how unqualified to do science. Darwin’s childhood education was at a classical school- much memorization of Greek and Latin, and some mathematics. However, he did assist his father in his father’s medical practice which involved a modicum of physical knowledge. He was also an avid collector of beetles, and studied the taxonomic literature of the time.

His formal medical education was in Edinburgh. Darwin received practical instruction in taxidermy from a “blackamoor” named John who was the former slave of Charles Edmonstone. John had also traveled extensively as a servant and companion for the famous explorer Charles Waterton. In November of 1826, Darwin took a course from Robert Jameson in “Natural History” in addition to his medical studies.

Jameson’s 200 page geological illustration addendum to his translation of Curvier’s Essay on the Theory of the Earth was part of Darwin’s reading that term. Darwin later wrote that he found Jameson’s lectures, “… incredibly dull. The sole effect they produced on me was the determination never as long as I lived to read a book on Geology or in any way to study the science.”

Darwin made several studies of marine life while at Edinburgh under the encouragement of Dr. Robert Edmund Grant, who shortly after became Professor of comparative anatomy and zoology at London University, (1827-1874). Grant referred in print to two of Darwin’s original discoveries made in 1826; that the so-called "ova of Flustra" were in fact larvæ, and that the little globular bodies which had been supposed to be the young state of Fucus loreus were the egg-cases of the worm-like Pontobdella muricata. Darwin had read papers on these observations to the student’s “Plinian Society” founded by Professor Jameson.

Two years later, Darwin had given-up medicine. He could not stand the sights, sounds, and smells of the surgery. Instead, his disappointed father sent him to Cambridge to prepare for the clergy. But more significantly, Darwin became closely acquainted with the Revd John Stevens Henslow, Professor of Botany, and the Revds Adam Sedgwick and William Whewell, respectively professors of geology and mineralogy. These men totally changed young Darwin’s early resolution to avoid geological science. Whewell sought to reform the practice of science into a more formal profession. In fact, he was the man who coined the word “scientist.” Sedgwick and Henslow both lead field trips that Darwin attended. Fieldwork is much superior to lectures for learning geology and what we would call ecology today. The famous voyage around the world Darwin took from Dec. 27, 1831 to Oct. 2, 1836 was through the recommendation of Henslow. It was Sedgwick who sent Darwin off on the HMS Beagle with a copy of Charles Lyell's "Principles of Geology," which Darwin said, “Allowed me to see with the eyes of Hutton.”

By the time Darwin returned to England, he was considered a respected scientist- but as a geologist. Particularly well received was his theory on the formation of coral atolls and reefs. This work has been shown to be correct in every regard. While working on his “big book,” Darwin also spent years in the study of the biology of barnacles, publishing numerous papers and culminating in the still well regarded books; 1852 Living Cirripedia, A monograph on the sub-class Cirripedia, with figures of all the species. The Lepadidæ; or, pedunculated cirripedes, Volume 1, and 1854, Living Cirripedia, The Balanidæ, (or sessile cirripedes); the Verrucidæ, Volume 2, London: The Ray Society.
Posted by Gary S. Hurd at 12:32 PM No comments: