For years, creationists have promoted the lie that erosion features following the Mt. Saint Helens volcanic eruption both "proved" that the Grand Canyon was deposited and carved out in the year of Noah's flood, and of course that Noah's Flood even occurred.

Chief in their "proof" is this photo attributed to Steven Austin of the Institute for Creation Research. For 27 years it has been copied to dozens of creationist websites, blogs, and on-line discussions: 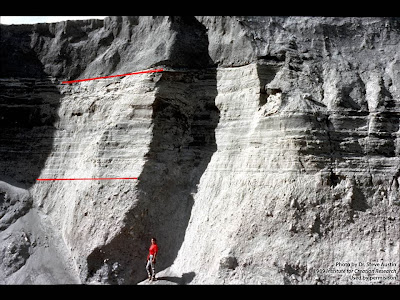 I added the red lines demarking three major deposition features. Austin described it this way, "The little "Grand Canyon of the Toutle River" is a one-fortieth scale model of the real Grand Canyon."(Austin, S. A. 1986. Mt. St. Helens and Catastrophism. Acts & Facts. 15 (7)). The original caption reads,


Figure 4. Twenty-five foot thickness of stratified
pyroclastic flow deposit which accumulated in less than
one day on June 12, 1980. The stratified flow deposit
forms the floor of the pit in Figure 1 which was later
eroded by mudflows to make the cliff exposure here.

The errors are many, and vary between just plain not true, and subtly not true.

A sequence of events


The first gross error of the "just pain" variety is that this geology is analogous or related to the Grand Canyon. There are actually three reasons it is not, first is that the there is no competent geologist that would think the pictured Mt. Saint Helens deposit was formed by long process. Second, the evolution of this deposit is still very active and the pictured features are merely temporary. Third, to call this a 1/40th scale model of the Grand Canyon is just stupid.

We see in the photo below that the initial (bottom) component in the creationist's photo was produced by landslides. This will produce a well mixed combination of older volcanic deposits, and a smaller amount of fresh material introduced by the eruption. What this deposit will not be is well sorted by size, nor will the larger fraction be at all rounded. 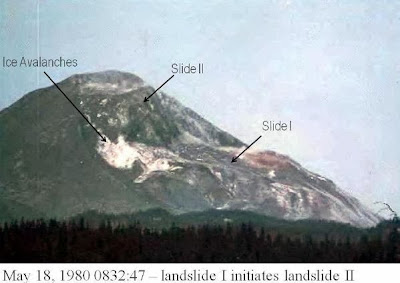 The landslides removed millions of pounds of rock which had held back the eruption. Once that was gone, the next massive event was the explosive eruption of mostly new material that had been under tremendous heat and pressure. The next photo shows us the volume and energy of that eruptive material. 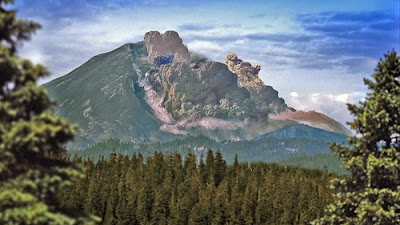 The material we have seen so far is what formed the lower "strata" that creationists claim models the Grand Canyon. It is from landslides augmented with a small portion of volcanic ash.

With the capping material totally removed, the next phase of the eruption began. This was the release of volcanic "ash." 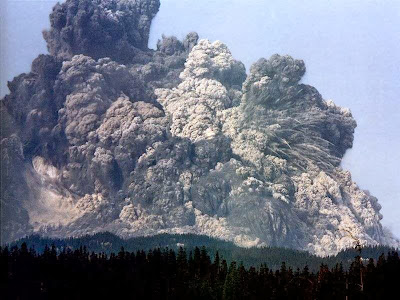 This is not at all like a wood ash. It is composed of tiny particles of volcanic silica, plus remelted and cooled rock fragments. The ash fell over 12 hours, and covered an area of over one hundred square kilometers. The chemistry, geology, and distribution of the ash is available from the United States Geological Survey article,"Properties of volcanic ash." 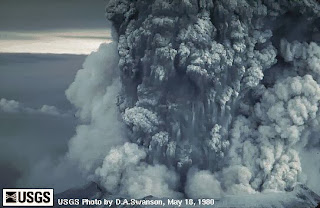 From the photos above we see that this ash has a mix of lighter, and darker particles indicating slightly different composition. These randomly sort out as the ash falls and settles on the ground. This forms the middle section of the creationist's photo. The small particles drifted down under the main influences of particle size, particle density, and prevailing wind speed. So, layers formed as the ash fall continued for over 12 hours. These layers were quite different from the water carried sediments most people are familiar with, and creationists like to attribute to "the Noah's flood."

The top section of the creationists "little grand canyon" is a well mixed dark colored sediment that is a combination of all the erupted materials, weathered soils, and a strong plant material fraction. The source is what is called a "lahar flow." The next two photos are of the Mt. Saint Helens lahar flows. The first is an aerial shot showing the extent of a late lahar flow. 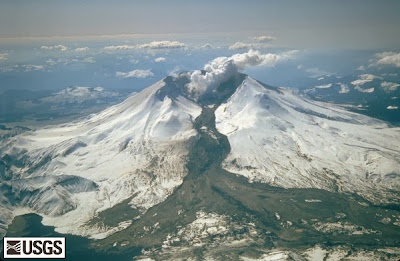 The following photo has several interesting features. First note that the flow was much higher than the residual deposit. Next, look at the amount of surface vegetation, tree bark and branches that were ground-up and added to the flow. Finally, looking at the exposed bank we see that a lot of weathered dark organic rich soil was added to the ash and volcanic rock mix. This is the source of the dark "cap" from the creationist's "strata" photo. 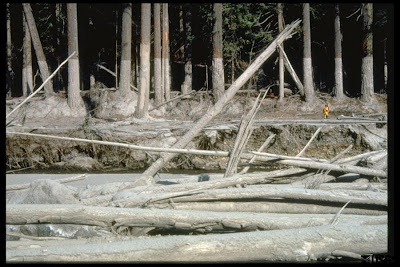 The creationist photos included this following image. It is striking in that it totally exposes their fraud. The image that Steven Austin described as "Twenty-five foot thickness of stratified pyroclastic flow deposit which accumulated in less than one day on June 12, 1980" is just a small, and untypical segment of the total mass of the 1980 Mt. Saint Helens eruption. Exposed in an actively eroding river bank, it obviously is a small segment that will not survive for very long either. 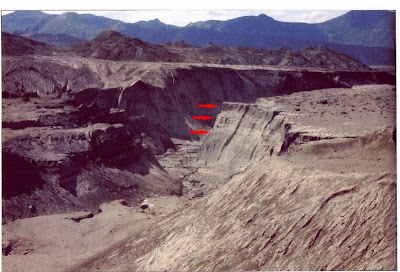 One last error of the "just plain not true" sort is that not a single one of these features from the Mt. Saint Helens volcano could possibly have formed underwater in the midst of a global flood.

It also forms a sad example of how creationists cannot bring themselves to tell the truth. Steve Austin and his followers hope to make others believe that real geologists would look at the apparent strata from the eruption so far as something that had taken a long time to have formed. They know that geologists don't think this.

PS: I wanted to add a link to a good Mt. St. Helens blog by Lance Wilson.