I know it is old 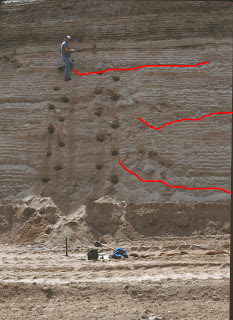 In a Facebook argument with some creationists there was the false claim "the layers of strata were already assigned ages before absolute dating was invented. all absolute dates that do not fit within the relative ages are discarded.
circular reasoning.
when Mr Hurd aquire a sample to test does he know anything about said sample?
like where it came from?"

And, "all radiometric dates are compared to the time frame assumed in the strata. which is an assumption on its own."

This little bit of sediment in the photo above was from a job I did with Mike Macko nearly 30 years ago. It was an excavated trench in Borego Canyon do for the Foothill Transportation Corridor in Orange County California. The red lines I added show the more obvious stream channels in this top part of the canyon sediment. They show us that there was a fairly rapid deposit of sands and gravels with the occasional boulder and cobble movement in floods. The stream channels weave back and forth across the canyon.

The only "Date" is that the higher deposit is mostly youngest.

And the project got big! 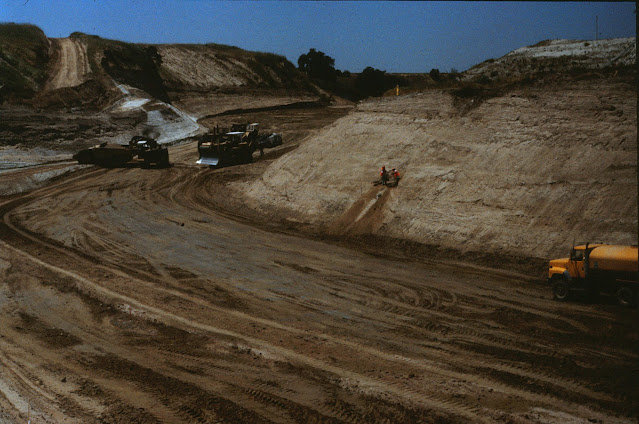 The "strata" for all that stuff and about 20 feet lower was just "Holocene" or, the after the most recent ice age.

So, what we did was to get an exact elevation relative to a single point, and collect charcoal from prehistoric fire pits.

Here I am in the dirt; 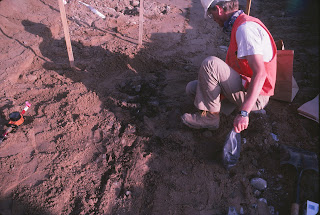 So the creationists also lied that;

"they will refuse to date an object unless you tel them exactly where it was found. this is because they throw out any date that doesn't line up with their preconceived timeliness.

And, " they compare various dating methods with strata and discard any readings that do not fit."

We collected 23 samples and paid for 13 radiocarbon dates. There was no site data needed, or requested. Just the sample catalog number. I plotted the results returned against the elevations from the two deep trenching cuts. The Sequence 2 was further up the canyon and in a more narrow slot. 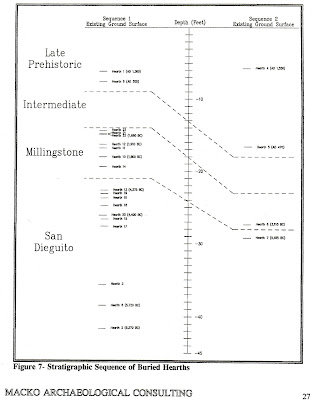 For some folks more interested, the various terms above "Late Pre-Historic," and so on are references to cultural groups defined by their differing technologies. They line up with Carbon-14 dates very well as shown below; 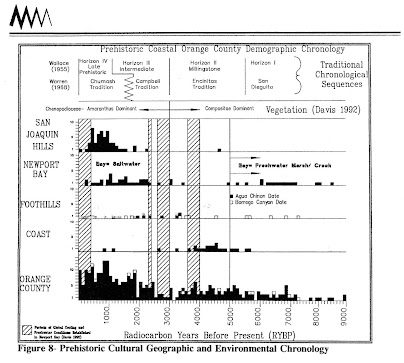