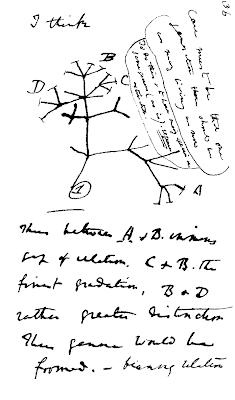 I have collected some examples of speciation that are handy to have available when a creationist claims there are none.

We have of course directly observed the emergence of new species, conclusively demonstrating common descent, a core hypothesis of evolutionary theory. This is a much a "proof" of evolution as dropping a bowling ball on your foot "proves" gravity.

Edit 2018, this is a real classic. Darwin's Finches had a recent rapid speciation by hybridization;


Here is another. These are gall flies diverging based on host plant selection which is similar to Apple Maggot Fly (Rhagoletis pomonella discussed below;


There was a very odd example just pointed out to me that could not have occurred in nature, "Laboratory synthesis of an independently reproducing vertebrate species" Aracely A. Lutes, Diana P. Baumann, William B. Neaves, and Peter Baumann PNAS June 14, 2011 108 (24) 9910-9915

Here we report the generation of four self-sustaining clonal lineages of a tetraploid species resulting from fertilization of triploid oocytes from a parthenogenetic Aspidoscelis exsanguis with haploid sperm from Aspidoscelis inornata.

A multi-species review is;


I want to add a link to Cornell University biologist Allen MacNeill's blog article on the emergence of new species.

A new emerging species is added to the list from a recent publication, “Hybrid speciation in sparrows I: phenotypic intermediacy, genetic admixture and barriers to gene flow” (JO S. HERMANSEN, STEIN A. SÆTHER, TORE O. ELGVIN, THOMAS BORGE, ELIN HJELLE, GLENN-PETER SÆTRE, Molecular Ecology, Volume 20, Issue 18, pages 3812–3822, September 2011). What makes this particular example interesting is four fold. First, it is a bird species, and vertebrate examples are less common. Second, it resulted from a hybrid between two similar species, which has not been considered a likely pathway to speciation in vertebrates. Third, the researchers have been able to identify the actual genetic differences between the three species. Finally, the event is incomplete, and still in process.


Here are five examples sampled from: "Observed Instances of Speciation" by Joseph Boxhorn, 1995

The former “Answers in Genesis” gang claims they have found a problem with using O. gigas as an example of polyploidal speciation. There are so many good examples of new species emerging, both in the wild, and in laboratories, that I would not want to use one that is incorrect.

The notorious creationist website “Creation Ministries,” disputes O. gigias as a valid example of polyplodial speciation. (Feedback, March 31, 2007 “Speciation Observed? Was this Evolution?” http://creation.com/evolution-by-fiat-and-faith#specob As I have found them to be grossly wrong on many occasions, I also checked their citation list. The creationist claim that O. gigas is not an example of speciation has only two supports; an article in 1943, and that they did not find botanical materials named O. gigias in on-line Botanical nomenclature reference collections. Oenothera names are a mess, but not as bad as Asteracea. O. gigias was apparently found to be a synonym, and is disused. This is trivial, and does nothing to change using the spontaneous emergence of the tetraploidal new species.

The “Creation Ministries International” phonies also cited a 1943 plant genetics article, “An amphidiploid in the F1 generation from the cross Oenothera franciscana x Oenothera biennis, and its progeny” (Davis, B.M., Genetics 28(4):275–285, July 1943). It is available on-line in PDF at: http://www.genetics.org/cgi/reprint/28/4/275.pdf

Read it for yourselves, if you like. It has nothing relevant to de Vries, or his O. gigias being used as valid examples of speciation. This is the sort of misrepresentation typical from professional creationists, who expect their followers to lack either the education, or motivation to actually dig through the science.

For a more recent review of the role polyplodial plants play in evolution, read;

And, here is a broader review on plant evolution and genome doubling that is also a bit easier to read;

Digby (1912) crossed the primrose species Primula verticillata and P. floribunda to produce a sterile hybrid. Polyploidization occurred in a few of these plants to produce fertile offspring. The new species was named P. kewensis. Newton and Pellew (1929) note that spontaneous hybrids of P. verticillata and P. floribunda set tetraploid seed on at least three occasions. These happened in 1905, 1923 and 1926.

Dobzhansky and Pavlovsky (1971) reported a speciation event that occurred in a laboratory culture of Drosophila paulistorum sometime between 1958 and 1963. The culture was descended from a single inseminated female that was captured in the Llanos of Colombia. In 1958 this strain produced fertile hybrids when crossed with conspecifics of different strains from Orinocan. From 1963 onward crosses with Orinocan strains produced only sterile males. Initially no assortative mating or behavioral isolation was seen between the Llanos strain and the Orinocan strains. Later on Dobzhansky produced assortative mating (Dobzhansky 1972).

Rhagoletis pomonella is a fly that is native to North America. Its normal host is the hawthorn tree. Sometime during the nineteenth century it began to infest apple trees. Since then it has begun to infest cherries, roses, pears and possibly other members of the rosaceae. Quite a bit of work has been done on the differences between flies infesting hawthorn and flies infesting apple. There appear to be differences in host preferences among populations. Offspring of females collected from on of these two hosts are more likely to select that host for oviposition (Prokopy et al. 1988). Genetic differences between flies on these two hosts have been found at 6 out of 13 allozyme loci (Feder et al. 1988, see also McPheron et al. 1988). Laboratory studies have shown an asynchrony in emergence time of adults between these two host races (Smith 1988). Flies from apple trees take about 40 days to mature, whereas flies from hawthorn trees take 54-60 days to mature. This makes sense when we consider that hawthorn fruit tends to mature later in the season that apples. Hybridization studies show that host preferences are inherited, but give no evidence of barriers to mating. This is a very exciting case(Rhagoletis pomonella). It may represent the early stages of a sympatric speciation event (considering the dispersal of R. pomonella to other plants it may even represent the beginning of an adaptive radiation).

So, even when there might still be limited inter-fertility in the diverging, R. pomonella, there is already a related speciation in an associated insect.

Rapid speciation of the Faeroe Island house mouse, which occurred in less than 250 years after man brought the creature to the island. (Test for speciation in this case is based on morphology. It is unlikely that forced breeding experiments have been performed with the parent stock.) Reference: Stanley, S., 1979. Macroevolution: Pattern and Process, San Francisco, W.H. Freeman and Company. p. 41

Formation of five new species of cichlid fishes which formed since they were isolated less than 4000 years ago from the parent stock, Lake Nagubago. (Test for speciation in this case is by morphology and lack of natural interbreeding. These fish have complex mating rituals and different coloration. While it might be possible that different species are inter-fertile, they cannot be convinced to mate.) Reference: Mayr, E., 1970. Populations, Species, and Evolution, Massachusetts, Harvard University Press. p. 348

There is a large literature on new species emerging among newly introduced colonies of Anole lizards. Here are just a few examples:


This next one is very interesting. It is a vertebrate (a lizard species), and the new species was produced experimentally as a hybrid cross. This is the same kind of genetic novelty as found in plants, e.g. Evening Primrose (Oenothera gigas) that I mentioned earlier.

The is also discussed on the Web at Panda's Thumb, and Nobel Intent.

One more on fish;

So, common descent is established by direct observation of speciation, and various selective pressures are seen to be effective. Depending on population size, and starting variability, selective pressures can be strongly acting resulting in rapid emergence of new species.
Posted by Gary S. Hurd at 3:38 PM 9 comments:


Philip S. Skell is a computational chemist. He disparages paleontology, and evolutionary biology. He is a creationist, and anything he writes must be interpreted with this in mind. His core argument is that evolutionary theory founders on the; "... origin of life, speciation, the essences of our fossilized ancestors, the ultimate causes of their changes, etc."

The origin of life, typically studied under the umbrella of abiogenesis, or astrobiology, is conceptually independent of evolutionary theory. Contemporary research is as much chemical as biological. Perhaps more so. As Darwin himself observed, concluding that there was a unique solitary original cell was merely the result of analogy, "But, analogy may be a deceitful guide." The core of evolutionary theory, common descent and natural selection, is unaffected by any origin of life scenario.

Skell seems unaware that speciation, the emergence of a newly isolated reproductive population is neither unknown, nor uncommon. We have directly observed the emergence of new species, conclusively demonstrating common descent, a core hypothesis of evolutionary theory. Depending on population size, and starting variability, selective pressures can be strongly acting resulting in rapid emergence of new species.
This is a much a "proof" of evolution as dropping a bowling ball on your foot "proves" gravity.

Skell is equally uninformed about the interplay between molecular genetics and paleontology. We have recently seen the publication of a draft genome of the extinct hominid, Homo Neadertalis. More tellingly, there has been a decades long exchange of opinions regarding whale evolution where hypotheses generated from both genetics and morphology have finally converged with the paleontological discovery of several new whale ancestors, particularly Ambulocetus natans, and Pakicetus.

Skell wrote that evolutionary theory is irrelevant to "doctors, veterinarians, farmers and other practitioners of biological science." He even mentioned that the discovery of penicillin was not a direct out come of evolutionary theory. And, of course it was not- it was a lucky accident. However, the subsequent and continuing development of antibiotics, including penicillin, was implicitly an application of evolutionary principles. It is either ignorant in the extreme, or dishonest, for Skell to claim that hereditable variations that result in altered population genomes under selection (evolution) are not critical to the study of antibiotic resistance. Equally, that evolutionary theory was not directly employed to alter clinical antibiotic prescription practice recommendations.
Posted by Gary S. Hurd at 12:42 PM 2 comments: