Bring Back The Bean Ball.

I know I just said that I would take the next eight posts to debunk the Rev. Miller.

BUT, the attack by Scott Cousins against SF Giants catcher Buster Posey is too outrageous to ignore. 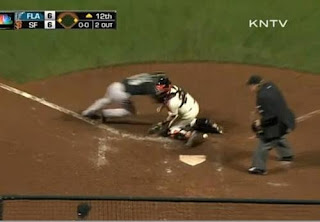 Note that Cousins has crossed the baseline, he has dropped his shoulder, and pulled in his arms in order to strike Posey. He makes no effort to even near the home plate. He broke Posey's leg, and worse, tore three tendons in Posey's ankle. This is a potentially career ending injury.
Posted by Gary S. Hurd at 1:06 PM No comments:

When the crazy goes mainstream.

I came across this the other day.  It is from Rev Adrian Miller, an Anglican vicar and a member of the Biblical Creation Society (British). He is giving his answer to a question he says he hears, "Why Won't Creationists Just Give Up?"

- Because we see the empirical data from the sciences fitting so much better within a creationist framework and using creationist models.

- Because we see as inadequate any hermeneutic that treats Genesis as having nothing to say about earth history, biology, palaeo-anthropology, and so on.

- Because we recognise the deistic theology and naturalistic philosophy on which Darwin built his biological ideas, and which seeps into our thinking if we embrace Darwin.

- Because we recognise the importance of revelation in our approach to knowing.

- Because we appreciate the 'Emperor's New Clothes', sociological factors that pressurise members of our society - especially the intellectual elite -to conform to this world, in opposition to Paul's teaching in Romans 12:1-2.

- Because history tells us that where the church has embraced Darwin, it has been weakened.

- Because Satan has provided people with a way of looking at the world that doesn't need God, and we need to expose the weaknesses in that proposition rather than compromise with it.

- Because, far from being bad for mission, creationism provides the best apologetical approach, and makes for the deepest disciples. Incidentally, this isn't to say that we don't have our work cut out convincing 'Greek thinkers' that our message of the cross is not foolishness (1 Cor. 1:22f) - it just means that it's even more important that we present a united front on these issues.


So, eight big chunks of crazy. I think these should orient my next eight posts.
Posted by Gary S. Hurd at 12:51 PM 4 comments:

Worth noting I'll need to update Emergence of New Speceis.;

Also discussed on the Web at Panda's Thumb, and Nobel Intent.
Posted by Gary S. Hurd at 7:42 AM No comments:

My Google news reader spotted an on-line magazine article called “Did God Make The World, and all that it contains?” by Arthur Lewin. Neither the magazine, “ThyBlackMan.com,” nor Dr. Lewin were known to me, so I took a look. I was disappointed and slightly irritated. In just under 500 words, Dr. Lewin (PhD in sociology from City University of New York) makes almost zero accurate statements. (Maybe you can find more than I could).

What follows are my comments posted to the website;

Mr. Lewin, in the day of Google, and Wikipedia your multiple errors are just not acceptable. First, Charles Darwin hardly addressed the origin of life at all, and at least in his published works accepted the possibility of a creator. Second, evolutionary biology has advanced a great deal in the last 150 years and Darwin’s books are of more historical than scientific interest.

You also suggest that creationism be taught merely because it is popular. Darwin wrote against slavery, and about the biological unity of mankind when most here insisted that slave ownership was a “god given right” of the White man, and even that the African slaves were soulless sub-humans. Facts are not altered by popularity, and at least in the sciences we try to stick to facts to build our theories.

As for some additional facts, John Scopes was never “exonerated.” The Tennessee Supreme Court found the Butler Act against teaching evolution constitutional. The court set aside the conviction because the Judge made a technical error by fining Scopes $100, when he was not permitted to go above $50, and the lower court decided not to retry the case.

Cartesian Duality is the notion that there is a non-material mind that is detached from the physical brain. Given the advances of neurochemistry, and application of new technologies such as functional MRI, we know that this was a false idea. (And it had little to do with any “science versus religious” conflicts).

Godel’s ideas about incompleteness apply to formal logic systems such as mathematics without any material constraints. The sciences rejected by creationists, especially biology, and geology, are already constrained by the physical realities we study, and so Godel’s theorem has no application. You had best try reading the original.

I want make a last observation to Dr. Lewin regarding his concluding statement, “And so we see that, ultimately, Evolution and Intelligent Design do not really contradict.”
They do most certainly conflict, if Dr. Lewin is using “intelligent design” in the same sense as its proponents, and in the sense it has in the various recent or impending legal cases (see Kitzmiller v Dover, or example). The scientific failure of Intelligent Design creationism has been explored by many scientists and philosophers. For two recommendations, see;

I was one of the contributors to the latter book.

The suggestion made by Dr. Lewin that following the “big bang,” life emerged and evolved according to natural laws is roughly the same as “theistic evolution.” I don’t find it personally persuasive, but there is no particular scientific objection to this. It is often called the “strong Anthropic principle” by cosmologists. It is worth noting that it is rejected by most ID proponents at the Discovery Institute, and is strongly opposed by the common Young Earth creationists.

Two books I can recommend on theistic evolution are;

They are a bit heavy theologically, but mostly readable.


Regarding the “fine tuning,” or “strong anthropic principle,” here is one in favor and one opposed;

Obviously McGrath is in favor of the idea that the “fact” the universe is “built” for us humans “proves” there must be a god. Actually he sidesteps the arguments made by Susskind (in fact he does not even mention Susskind, or the equally strong counter arguments of of my colleague Victor J. Stenger (2004, “Is the Universe Fine-Tuned for Us?” in “Why Intelligent Design Fails,” 172-84). The best short refutation of the fine tuning case I have seen was by the science fiction author, Douglas Adams. In late 2000, he gave a talk at the Massachusetts Institute of Technology. He compared us to a mud puddle that looks around and says, “What a nice hole in the ground – it’s made just for me! Look at how nicely it’s indentations fit my beautiful curves, and the depth and the radius are just right…”