The Institute for Creation Research and their dupes, v.1.0. 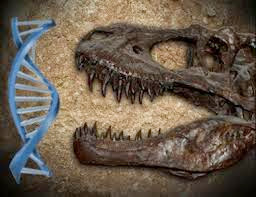 The Dallas News recently ran a puff-piece lauding the Institute for Creation Research. The major reason to avoid public face-to-face debates with creationists is that they practice the technique called the “Gish Gallop” named after the late Institute for Creation Research master-debator Duane Gish. The method is to lie as rapidly as possible about as many possible things that the real scientist is overwhelmed. It was known before Duane Gish perfected it as the, “BuryThemInBullshit” method. However, in a written format this method typically falls apart. Sadly, I'll show that even in a supposedly public forum creationists cheat and lie with impunity.

During a protracted discussion in the Dallas News website a "bull-creato" emerged. A particularly outrageous false claim was made by creationist Paul Koepp, "Unfossilized organic soft tissue is found all through the geo column, found even in the Cambrian and dino DNA (small pieces of it) exist and have been documented."

He has consistently asserted this and obviously never consulted any reliable sources. I requested actual valid references which I knew don’t exist. Koepp replied with a number of vague claims about scientific papers, and more links to creationist websites. He then boasted, "Am I the one lying and being dishonest, or is there a learning curve going on here?"

It took a while to actually find and read the science journal papers alluded to, or cited in his creationist websites. My colleague Prof. James Hoffman provided some of the more difficult to find. (That link was to a very solid resource that anyone opposing the creationist anti-reality campaign should bookmark.) The creationists are lying again. What a surprise that must be!

I certainly never expected Mr. Koepp to admit he had lied. I actually doubt he is capable of recognizing his falsehoods. But the flagrant incompetence and/or dishonesty in the claim, “dino DNA (small pieces of it) exist and have been documented" should be sufficiently obviously false that any sane, rational person will see the error. The specific argument in support of his falsehood was some links to creationist websites, and one scientific article published in 1994. That article was, S. R. Woodward, N. J. Weyand, M. Bunnell, “DNA sequence from Cretaceous period bone fragments” Science 18 November 1994: 1229-1232.

In less than one year after the Woodward et al publication, their entire claim was debunked by four teams of paleontologists. One team that correctly identified Woodward’s “dino DNA” as modern human had Mr. Koepp’s favorite paleontologist, Mary Schweitzer, as a member.

The unknown sequences “like nothing we’ve seen before” according to Woodward were positively identified as, “the mule deer (Odocoileus hemionus, accession number X56291) and to human cytochrome b genes (Homo sapiens, accession number V00662) by Allard et al. Woodward thought his own cell’s DNA was from dinosaurs. Zischler et al sarcastically wondered maybe their human DNA had been contaminated with mysterious unknown dinosaur DNA. They concluded that in fact, Woodward had merely failed to use good lab procedure and had analyzed his laboratory's human contamination.

Here we are 20 years later, and Institute for Creation Research frauds, and their creationist dupes are still spewing lies about the discovery of "Dino DNA."

Why did these lies by Mr. Koepp go uncorrected? Because the Dallas News repeatedly banned, and deleted the correct information from their website.