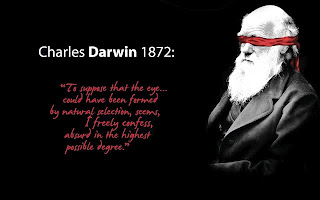 In a recent FaceBook post by creationist Richard Haralambus, a link was given to a Hindu inspired UFO cult. This was amusing all alone since Mr. Haralambus presents himself a a Christian. I wanted to do a point by point debunking, but health and kitchen plumbing intervened. I have some free time today, and I'll make a start.

I do not want any creationists to comment in this thread at all. Your opinions are pointless.

The link was to an article entitled, "9 Scientific Facts Prove the "Theory of Evolution"," and it had as the top illustration a "quote mine" from Charles Darwin's book, "On the Origin of Species." (The Hindu UFO cultist cited the sixth edition). I have copied the JPEG to this page so that nobody will waste time going to the cult's advertisement trap. If you really want to see it, the site is called "humansarefree dot com"

Here is the entire quote in proper context.

1859, CHAP. VI. [186-187] ORGANS OF EXTREME PERFECTION.
Organs of extreme perfection and complication.—To suppose that the eye, with all its inimitable contrivances for adjusting the focus to different distances, for admitting different amounts of light, and for the correction of spherical and chromatic aberration, could have been formed by natural selection, seems, I freely confess, absurd in the highest possible degree. (only portion used by creationists) Yet reason tells me, that if numerous gradations from a perfect and complex eye to one very imperfect and simple, each grade being useful to its possessor, can be shown to exist; if further, the eye does vary ever so slightly, and the variations be inherited, which is certainly the case; and if any variation or modification in the organ be ever useful to an animal under changing conditions of life, then the difficulty of believing that a perfect and complex eye could be formed by natural selection, though insuperable by our imagination, can hardly be considered real."


In the 1872 6th edition, Darwin devoted the bulk of 4 pages, 143-146, to details of the evolution of eyes from light sensitive nerves to those of vertebrates. He cites studies from paleontology, and embryology. He concluded,

"... and when we bear in mind how small the number of all living forms must be in comparison with those which have become extinct, the difficulty ceases to be very great in believing that natural selection may have converted the simple apparatus of an optic nerve, coated with pigment and invested by transparent membrane, into an optical instrument as perfect as is possessed by any member of the Articulate Class."

So before we even get to the text, the author is already lying. This is a popular lie with many creationists, and is a TalkOrigins featured creationist falsehood. Darwin clearly refutes the notion that an eye could not evolve. Indeed, a recent book by Professor Ivan R Schwab, “Evolution's Witness: How Eyes Evolved” (2011 Oxford University Press) shows in great detail just how eyes have evolved many times. A new paper traces the chemical, genetic and functional evolution of the mammalian eye over 90 million years;


The second graphic I have posted shows a sketch of the known stages of eye evolution from Nilsson and Pelger,
1994 "A Pessimistic Estimate of the Time Required for an Eye to Evolve" Proceedings of the Royal Society 256: 53-58 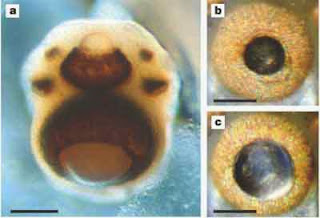 Notice that these idealized steps are represented in a single modern organism, the Box Jelly.

The next lie told by the Hindu/UFO cult leader Alexander Light was a compound lie. There are multiple parts mixed together across a few paragraphs. Here are some relevant sentences.

I'll first point out that Charles R. Darwin even wrote an entire book in 2 volumes on selective breeding, "The variation of animals and plants under domestication" (1868 London: John Murray, Publisher).

It is an excellent example of how selection alters the physical, and genetic biology of a species.

The remark about "recessive traits" might seem like a non sequitur. It is. However the unenlightened Mr. Light thinks this is an important fact. Mr. Light continues, "A desired trait can be produced in dogs by selecting dogs with a particular trait to produce offspring with that trait. This specialized selective breeding can continue for generation after generation until a breed of dog is developed. This is the same as the "survival of the fittest" theory of the evolutionists."

One more scientific and historical objection is that "survival of the fittest" was a phrase invented and promoted by 19th century economist Herbert Spenser. He had his own version of "evolution" with the explicit application to human institutions, and society. Darwin resisted using this term until it became so popular that he could not avoid it. Even then Darwin first used the phrase in his 1868 book on Domestication, and not until the 1869 5th edition of "Origin of Species." He then directly attributed this to Spencer, and in the context of human selection of domesticated animals. He nearly dismissed Survival of the Fittest when writing, "But Natural Selection, as we shall hereafter see, is a power incessantly ready for action, and is as immeasurably superior to man's feeble efforts, as the works of Nature are to those of Art." ("Origin," V Edition, pg 79).

The Hindu/UFO cultist site makes the false claim, "New variations of the species are possible, but a new species has never been developed by science. In fact, the most modern laboratories are unable to produce a left-hand protein as found in humans and animals. Evolutionist fail to admit that no species has ever been proven to have evolved in any way. Evolution is simply pie-in-the-sky conjecture without scientific proof."
There are several errors/lies. The most blatant is "a new species has never been developed by science."
We of course have directly observed the origin of new species in nature, and in experimental settings. I compiled a list of dozens of examples. The earliest publication was over a century ago. See: Emergence of New Species.

The creatocrap continued with "In fact, the most modern laboratories are unable to produce a left-hand protein as found in humans and animals."

But, the third lie is that we do not manufacture synthetic proteins, and genes to make them. We can, and we do.

For two papers I just read last night on new proteins made from first principles, see: