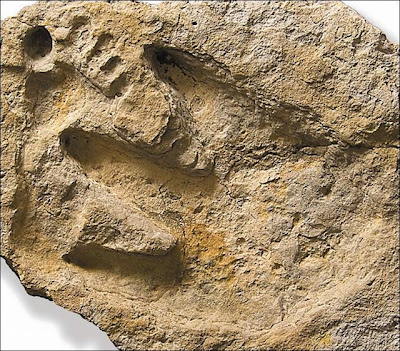 There are many websites that have detailed the many frauds of Carl Baugh.

There are his fake "doctorates."

There are his many frauds housed in his "museum."

The most notorious are his fake human foot prints supposedly associated with dinosaurs.

An extensive analysis of Baugh's other fake "evidences" is found at Glen J. Kuban's excellent website.

Pastor Jim Mumme is an idiot

In a guest editorial, Pastor Jim Mumme made some of the more gross misunderstandings of physical science I recall reading. What is sad is that I suspect Pastor Jim thinks he is advancing a reconciliation between science and religion.

"Pastor" Jim claims to love "science, and ... Christianity’s doctrine of creation." Yet he showed very little understanding of either. His scientific errors begin almost immediately when he wrote, "Energy is defined as the capacity to do work." That would be a crude definition of "entropy." He goes on to say, "Energy is actually invisible, and only its use or result can be seen." Just what does Pastor Jim think his eyes see with? The rest of us use photons which are a form of energy. In fact they are the "pure light" he confused with a weird unorthodox doctrine conflating light and the Divine. When Pastor Jim wrote, "Man can change matter to energy, and an example would be burning gasoline to run an automobile or coal to warm a building," his 'scientific' credibility left the room entirely. Burning gas, or coal does not convert mass into energy; burning releases chemical energy stored in the fuel.

Mr. Mumme weirdly links the notion that mankind cannot generate matter from light, that Genesis opens with a command "let there be light," and concluded that God "actually made the material world out of His personal energy."

We can create matter from energy. One way used massive particles and one could quibble that this was not "pure light" energy. But a new paper published just today (Pike, Mackenroth, Hill & Rose) shows how we can actualize the experimental results predicted in 1934 by Breit and Wheeler. This is the direct generation of electrons from photons; matter from pure light. This also reduces "Pastor" Jim's theology to rubble.

I must admit that I like to watch the stats change on Stones and Bones.

I always know when Carl Baugh had been on some preacher's TV show because the hits on Baugh's fake fossils spike. Over the years, they have generated about 10% of my total viewers.
Posted by Gary S. Hurd at 5:14 PM No comments:

I have not been writing posts for Stones and Bones. I have been cruising newspaper discussion forums all this time, as well as getting in a lot of fishing.

I have also been receiving emails from creationists, and even a few fans who have read some of my comments to various public venues. I have thought that I might share a few of these in separate headings of "Fan Mail" and "Hate Mail." The first is the "Fan Mail" basket.

I followed some parapsychology nut's website to an article on a "second DNA
code" hidden in codon bias... which I admit, piqued my interest... until I
saw what utter crap the reporting on it was.

The only bright spot in the 15 minutes I wasted reading the article was
reading your exchange with the creationist commenters. It took some effort
to track you down to email you, but I feel that patience and scientific
clarity like yours deserves to be recognized.

The website I had commented on was the University of Washington's press release office, specifically about their crappy puffery about the discovery of "duons."

That particular discussion thread brought me another email from Joe Smith. Short, but nice;

"Gary,
Cheers good job standing up to the crowd of reflex thinking creationist online. I was looking up the Exonic Transcription... and saw your criticism. Not bad! Yeah the paper is a bit flawed.
~Joe"