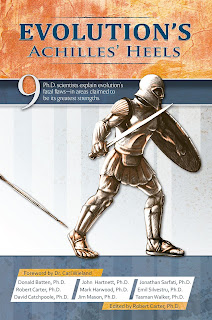 I have read this book, and some parts several times. It would take several books to correct the outright lies. So here is a list of those books already written.
John Avise
2010 "Inside the Human Genome: A Case for Non-Intelligent Design" Oxford University Press
Carroll, Sean B.
2007 “The Making of the Fittest: DNA and the Ultimate Forensic Record of Evolution” W. W. Norton & Company

Hazen, Robert M.
2019 “Symphony in C: Carbon and the Evolution of (almost) everything.” Norton and Co.

Lane, Nick
2015 “The Vital Question: Energy, Evolution and the Origins of Complex Life” Norton and Co.

On Cosmology I'll note that there is no consensus among the physicists. They are a cantankerous crowd.
Gross, David
2005 “The Quantum Structure of Space and Time: Proceedings of the 23rd Solvay Conference on Physics”  Ed. David Gross (Brussels: World Scientific Pub Co Inc)

Krauss, Lawrence
2012 “A Universe From Nothing” New York: Free Press

I apologize for being so slow. I have been reading and taking notes on this rancid book for weeks.  Brandolini’s law (also known as the Bullshit Asymmetry Principle) is about to overwhelm me.

A week ago I got into a short on-line conversation with a Young Earth Creationist. Jon Hambridge is British, and works in quality control.

As anyone who has read anything on this blog, or anywhere else I have published, this was not the first time I have interacted with a YEC.

In this case the creationist wrote that he was particularly impressed by a book, “Evolution’s Achilles’ Heels: 9 Ph.D. scientists explain evolution’s fatal flaws – in areas claimed to be its greatest strengths” It was produced and published in 2014 by none other than the old crew from Answers in Genesis, now known as “Creation Ministries International.” I didn’t detail to him how AiG was basically stolen from the original crew by Ken Ham. (But that is how it went, See “Creation Ministries International Formerly Answers in Genesis)” by John Stear, May 2006 for all the gory details ).

After a bit of back and forth I suggested to Jon that I’d order the book (if there was a used copy on-line as I will not buy new copies of creationist books that pay the publishers) and we could follow up later. I ordered a nicely discounted used copy that came just the other day.

The text and authors are as follows.

Introduction was by Carl Weiland,

The Origin of Life, Jonathan Sarfati,

So what I suggest is that I take the various topics as the spirit moves me. I’ll post here and then invite Jon to comment. For the time being, I’d like the comments to be restricted to just Jon and I.

We shall proceed in full cognizance that, “Ignorance more frequently begets confidence than does knowledge: it is those who know little, and not those who know much, who so positively assert that this or that problem will never be solved by science.” – Charles Darwin “The Descent of Man, and Selection in Relation to Sex” (John Murray, London, 1871) vol. 1, p. 3, and the stark reality of Brandolini’s law (also known as the Bullshit Asymmetry Principle): “The amount of energy needed to refute bullshit is an order of magnitude bigger than that needed to produce it.”