A little bit on a newspaper item

I knocked this out waiting for a phone call. Posted to a Huston, Texas newspaper.

The famous creationist Duane Gish perfected a debate technique of spewing so many lies in just a few minutes that his opponent would need hours to reply. The even became known as the "Gish Gallop."

"JosephU" has adopted the same method in his recent comment on science. He used 8 items that supposedly confound evolutionary biology. But each of these makes multiple false statements. But the lies started even sooner. Creationists do not want any science taught in schools because all sciences honestly taught expose creationism as a fraud.

Consider JosephU's first claim regarding the Second Law of Thermodynamics. The first error is that evolutionary theory is an account for the origin of life. Second is the assumption that "man" is the ultimate goal of evolution. There are multiple additional reasons that the 2ndL is never violated by life, or evolution that I'll just link to below. But the most obvious is that if life violated the 2ndL, we and all other life on earth could not exist. Consider the "spontaneous increases in order" that take place when a chick grows in an egg, or a tree from a seed. For a detailed examination I recommend reading "An Introduction to Entropy-and-Evolution and The Second Law of Thermodynamics: (The Second Law in Science and in Young-Earth Creationism) by Craig Rusbult, Ph.D. http://www.asa3.org/ASA/education/origins/thermo.htm. This was written by a Christian specifically for a Christian audience. For a somewhat more technical article, see: "Entropy and the second law of thermodynamics" by Professor Frank L. Lambert, http://2ndlaw.oxy.edu/

JosephU's second claim is that evolution is a theory about the origin of the universe. It isn't. Charles Darwin in 1868 called it "absurd" to expect a theory of biological change to account for either the origin of matter, or of life. But, we do know today quite a lot about the origin of the Universe, at least our part of it. I suggest reading The NASA Wilkinson Microwave Anisotropy Probe (WMAP) website on "Cosmology: The Study of the Universe" http://map.gsfc.nasa.gov/cosmology/cosmology.html

His third false claim is that amino acids cannot form "through natural processes." We can and do observe this happening constantly. Perhaps the most famous experimental observation was by Stanley Miller back in 1953. But, we have since then discovered many other natural mechanisms that generate amino acids in marine hydrothermal vents, and cometary ices.

By now the readers should get the idea. Every single "fact" used by JosephU is a non-fact. They are falsehoods. And these are the falsehoods creationists like he and Barbara Cargill want taught instead of science.
Posted by Gary S. Hurd at 1:32 PM 2 comments:

I have been a lazy boy

But, I have had some great days fishing. The fishing season finished this year with a Big Bang. I wish I had remembered to bring a camera. I have been enjoying Calico Bass, Boccaccio (a rockfish in the genus Sebastes), and various tuna. Today I'm preparing about 30 pounds of tuna for my smoker.

I have not forgotten "Stones and Bones," or the evo-creato battles. Here is one nice Dorado that I caught a few weeks ago. 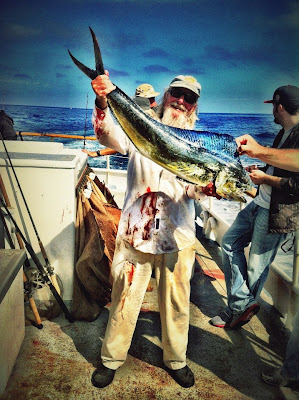