I don't get it

I fail to see the connection. Any ideas in the multiverse?
Posted by Gary S. Hurd at 8:22 PM 3 comments:

And I missed this one;

DNA sequencing studies starting in 2010 showed that there was interbreeding between H. sapiens, and Neanderthals (1). We also know that there was a third archaic human population known as the Denisovan, named from the Siberian cave where the first examples were recovered (2). They also interbred with modern H. sapiens, and at least occasionally with Neanderthals (3, 4). Finally, it has been shown that Neanderthals had a high amount of inbreeding, and more limited social and economic networks (4).

Modern humans all have H. sapiens mitochondria. Mitochondria are the cell organelles that make the “energy molecule” ATP. They also have their own DNA. So, for openers we know that no offspring from a Neanderthal female and a H. sapiens male mating later reproduced. It is even suggested that the female H. sapiens would be incapable of carrying a Neanderthal sired male fetus to term (5, 6).

So what does this say about the interbreeding behaviors of these 3 distinct human populations. First, the archaic humans were in decline even at the start of the modern human expansion out of Africa and into Eurasia. A massive glaciation event between 200, and 100 thousand years ago pushed the archaics into a terminal decline. And, as the moderns expanded, the archaic populations declined even faster. 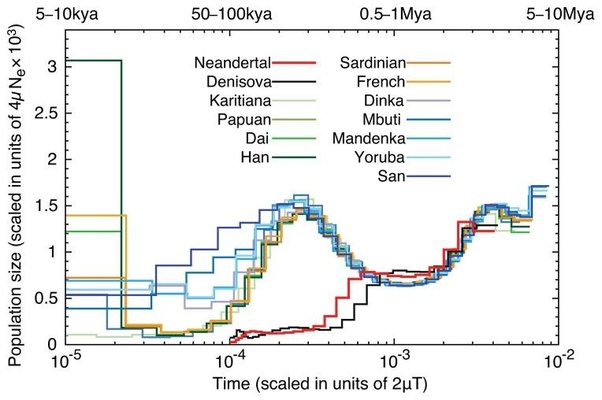 For those observed data to make a fairly easy social story, isolated Neanderthal males were adopted out of failing groups into modern human Hunter and Gatherer groups. They mated the modern females, and had a limited number of successful fertile female offspring. If the modern human female was adopted, or what have you, her carrying any Neanderthal genes would have been lost.