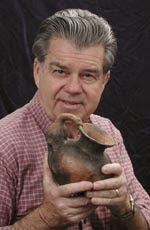 I thought I'd pull the items I wrote about Carl Baugh, and his purchase of the faked "human and dinosaur together" foot print, AKA the "Alvis Delk Cretaceous Footprint"

Edit 2018, Since I posted this the "Creation Evidence Museum" has replaced their original website. New URLs were assigned. The new main article on the Delk fake is;
http://www.creationevidence.org/displays/alvis_delk_cretaceous_footprint.php

Worse, nearly all high resolution photos have been taken down.

The list in the sequence I wrote them follows;

"Playing footsy with the truth"

"Other views on Baugh's fake foot"

As it happened, I was so certain that there would be a faked patina on the carving that I "over interpreted" an early published photo of the fake foot prints. It turned out that a much better photo was published (by a creationist supporter of Baugh) which did clearly show the obvious result of an acid wash. A short while later, the granddaughter of one of the local foot print "artists" told a newspaper how her grandfather had faked human&dinosaur footprints, including the detail of using acid to "make it look old."

Carl Baugh has many other dubious, and out-right frauds to his discredit:
Carl Baugh's many frauds
Posted by Gary S. Hurd at 9:08 AM

The link is to real human footprints from an archaeological study.

A blog on dino footprints.