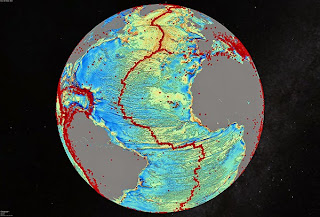 A wonderful website with recent data on the marine geological system is Exploring Ocean Tectonics from Space. It augments everything I wrote 3 years ago.

"Catastrophic plate tectonics" is a Young Earth Creationist Con-job. For the short description see Catastrophic Plate Tectonics: A Global Flood Model of Earth History from the Institute for Creation Research.

We can dismiss "catastrophic plate tectonics" with just a few observations about inertia, and friction. 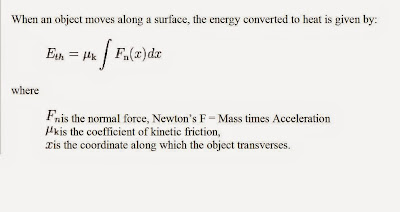 If some single land mass were to break up and then the bits (Africa, Eurasia, North and South America, Australia, and Antarctica) go slamming across the globe like billiard balls, there are consequences. One of them being the heat necessarily generated by friction between the crustal rock, and the upper mantle. This is given in the "Coefficient of Friction" seen above. Were did this heat go? Because it would have been enough to have melted the crust, and boiled the oceans into steam. And, we can calculate an estimate of the energy needed to push up mountains all over the world as continents crash together. If this were to have occurred rapidly, again the heat generated would have melted the mountains, and not forced them into the air. (For public lectures have the audience rub their hands together for friction heating, and clap them together for impact heating).

If you free inertia by reducing the friction between the mantle and the crust so that they can move quickly without melting, then when you slam them together mountains splash into space- ridiculous.

Mantle transmits vibration just like sound through air, or water. We can use the same techniques as sonar to map the interior of the Earth. And, because vibration travels differently through cold matter (faster) than warm, we can map the interior temperature structure.; 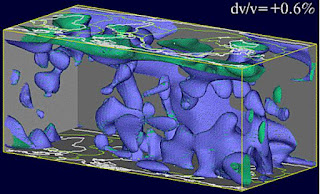 Above is a map of cold crust sinking into the mantel, and below is one of warm mantel rock moving upwards by convection; 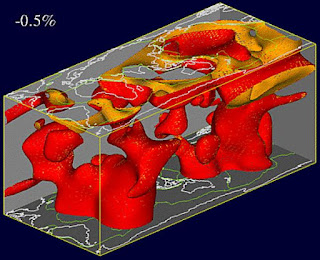 Both images above were from The Harvard Seismology Group
http://www.seismology.harvard.edu/index.html
These maps illustrate another reason for rejecting "the catastrophic plate" nonsense; the rapid movements of the continental crust would have swirled the mantle into a homogeneous mass, and the temperature separation we can clearly measure would have disappeared. Nor could creationist twaddle about rapid continental crust movement account for why convective plumes just happen to perfectly coincide with submarine spreading zones,oceanic mountains, or basalt traps.

There are other consequences as well. In the scientific study of continental movement, we learned that there are submarine spreading zones marked by intermittent basalt eruptions that force the continents apart. We also know that the Earth's magnetic field occasionally reverses polarity. As the rock of submarine basalt ridges cools, it records the magnetic polarity of the planet. Basalt on continents does the same thing, but not quite so well. Below is a map of the magnetic reversals recorded from a submarine spreading zone, and the corresponding map of these polarity changes from a stacked series of continental basalts; 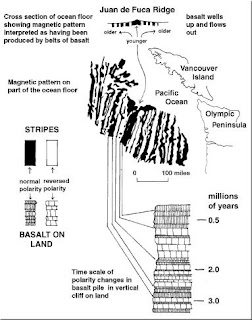 There are some very interesting features, the magnetic signal from the submarine basalts is symmetric- the same on both sides of the fault. The magnetic signal weakens the further away we go from the spreading fault line due to fragmentation, and burial (more simply "erosion"). The continental basalt stack recorded the same polarity reversals, at the same times. There is the expected differences in physical spacing since the two formations are built from different flows.

There is another feature we find in the continental stacks of basalts illustrated in the photo below taken in Oregon, USA; 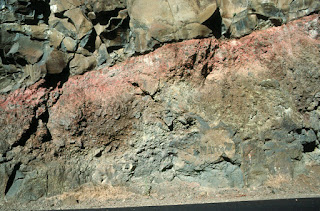 
Note the fractured, and oxidized red color were the lower basalt flow has been capped by a later one. That is the result of weathering. It was exposed to the action of plants, air, and water. Not possible in the middle of a flood.

(Educators are welcome to use these images in their teaching, so long as the images are not reproduced in publications and are not used for financial gain.) I think that permission covered this use. If you disagree, I have provided the sources and you are free to contact them.

Gary, Gary, Gary. The heat of friction went the same place that the excess heat from accelerated radioactive decay went: somewhere, we don't know where or how, but we're sure God took care of it somehow:

The RATE group is confident that the accelerated decay they discovered was not only caused by God, but that the necessary removal of heat was also superintended by Him as well.

It is so obvious now.

Dr. Hurd, this isn't about the topic of your article but you may find it interesting. It pertains to Liane Gabora and the paper she wrote that you commented on at ATBC in the Uncommonly Dense Thread.

Dr. Hurd, assuming that you're speaking to me, I commented here just to let you know about more information on Liane Gabora, and I figured that this was as good a place as any.

I'm not registered at ATBC and don't feel like doing so just to leave one message.

If my comments have created a problem here, feel free to remove them.

Stinking greedy slimers at photobucket have screwed over tens of thousands of people.

I'll need to relink all these JPEGS.